Mass extinction, security and intervention in the Anthropocene

This video is a full recording of my paper, given on 2 December 2014 at the international symposium (Im)mortality and (In)finitude in the Anthropocene, organised by Thom Van Dooren and Michelle Bastian. Please see the symposium’s website for recordings of the other talks and keynotes.

How can and should humans respond to mass extinction? To ask this question is to inquire into the nature and capabilities of human agency – in particular, its ability to intervene in the conditions of earthly life. In Western secular cosmology, humans are expected to intervene in being – that is, to determine the conditions of their own existence and that of the other beings with which they cohabit the Earth. This expectation has produced a powerful image of agency, one in which humans are capable of interposing themselves into spatio-temporal trajectories and channeling them in desired directions. For instance, they may absorb these trajectories within existing structures and conditions, or harness them to bring about new states of affairs. In all cases, human agency is understood to be capable of intervening ontologically to create conditions favourable to human life, and other forms of life valued by humans. The concept of intervention is most often discussed in the field of international relations, where it refers to the acts of states and international organizations to interpose themselves in trajectories of violence. However, intervention is not always an exceptional or disruptive event; increasingly, it has become an aspect of everyday life. In discourses and practices of contemporary security, interventions to predict, contain or defuse threats to human life are embedded within the mundane aspects of collective life. Crucially, these interventions are intended to keep a promise (see Aradau 2014) that the continuity of life as we know it can be maintained indefinitely.

Mass extinction raises a significant threat in terms of this notion of security and the interventions designed to achieve it. By negating entire modes of being, it precludes any possibility of their continuity into the future. Yet most contemporary responses to mass extinction follow the model of security interventions. They are reflected in techniques such as conservation, the collation of ‘big data’ on biota, the identification of ‘endangered’ species, forced breeding and other mechanisms to regulate the tempos of life and death. All of these interventions assume that it is possible for humans to intervene effectively in processes of mass extinction in order to ‘fix the problem’ – that is, to halt or at least slow it down, in order to keep the promise of security.

However, I argue that this imaginary of agency is complicated and ultimately confounded by the conditions of the Anthropocene. Within this understanding, what we tend to think of as human agency is in fact an unstable amalgam of agentic forces: biotic, geological, chemical, physical and cosmic. I argue that the conditions of the Anthropocene undermine the temporal basis of intervention: the notion that humans can stand outside of the processes into which they intervene, entering and exiting at will; the belief that humans can instrumentally redirect these processes; and the human ability to consolidate their interventions around new or previous trajectories. Instead, in the conditions of the Anthropocene, action is reflexive – there is no temporal distance between the ‘subject’ of the act and its ‘object’. Moreover, Anthropocene processes such as extinction unfold over periods and scales (both massive and miniscule) that evade human-calibrated notions of time. As such, humans cannot inter-vene in these processes. Instead, they are always-already intra-vening (Barad 2007). This means that the instrumental, linear promise of security offered by the image of intervention is replaced by the nonlinear, unpredictable, self-magnifying processes of intra-vention.

The upshot of this analysis is that humans cannot expect attempts at intervention to keep the promise of security. Does this mean that human agency is hamstrung – that is, that we can do nothing in the face of mass extinction? On the contrary, I conclude by arguing that recognition of the conditions of the Anthropocene, and of the effects of intravention, open up a range of different possibilities for facing mass extinction. Facing up to extinction without making or demanding promises can multiply the possibilities of ethical response to mass extinction, and the forms of life that they enable.

Pop apocalypticism: Bob Geldof and the End of the World 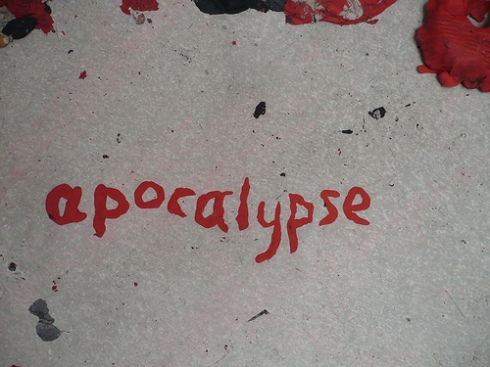 Bob Geldof has recently claimed that the world will end – and soon, perhaps in the next 17 years. In an address to a summit of young people in Johannesburg, he warned that anthropogenic climate change could lead to ‘the end’. His speech was rife with neo-apocalyptic themes, including an arbitrary yet specific date for the end of the world and references to unspecified ‘signs’ of impending doom. Geldof presented himself as a kind of millenarian prophet, pronouncing judgment on humanity (let’s not forget the messiah-complex lyrics of his song ‘The End of the World’, in which he compares his prophecy to those of Buddha and Nostradamus).

Apocalyptic posturing like this is counter-productive if the goal is to inspire innovative action around climate change. On the contrary, it’s more likely to provoke a sense of despair and helplessness, resentment at previous generations and the damaged ‘world’ that threatens to snuff out humanity.

But what I find most jarring about Geldof’s claims is that he equates the end of the world with a ‘mass extinction’ event that will wipe out the human species. From this perspective, ‘the world’ will cease to exist if humans in their current form are not here to inhabit it.  Indeed, he claims that “The world can decide in a fit of madness to kill itself”. Given that the only subjects referred to in his speech are humans, we can only assume that the ‘it’ in this sentence is ‘humanity’, and that the self-destruction of humanity is the destruction of the world. The idea that ‘humanity’ and ‘the world’ are co-extensive is a common and misleading one, and it is an example of anthropocentrism at its most extreme.

A great deal of the discourse on climate change is oriented towards protecting ‘humans as we know them’ and maintaining their ways of life. But the truth is that ‘the world’ is not only human. The scope of evolution shows us that species come and go  – and, of course, evolve. Truly challenging thinking about how to cope with world-threatening events does not frame the end of ‘humanity as we know it’ as the end of the world, but rather as a shift into a different configuration of the world.

This is not necessarily a good thing for humans. And I am most certainly not suggesting that we should sit back and accept the destruction of humanity. But we need to use the possibility of humanity’s destruction as a prompt for thinking about multiple possible futures, not for mongering fear about certain and inevitable destruction. We are mired in international security discourses obsessed with uncertainty. Yet it is actually perceived certainties like the one Geldof professes that most suppress human action and ethical sensibilities. They do so by making all outcomes appear pre-determined and all attempts to change them pointless or unfeasible.

There is a need to talk about what the world will look like in the future as a result of destructive human action, and if/when humans (at least as we know them) may no longer exist.  This conversation is already going on in a number of places, not least the Future of Humanity Institute at Oxford.    In the public sphere, this discussion needs to focus on what the world might be like without humans, instead of assuming that it will be no more.

Thinking about the possibility of a (literally) post-human universe can help us better to understand what we mean by ‘human’ and what we want humanity’s role in the world to be. It can also help to set humans into context, placing us back into the broader sweep of geological time from which humanism has artificially removed our species.

It may engender a more realistic sense of human capabilities, putting human agency into perspective by juxtaposing it with much larger forces and events and encouraging us to think about how our agency might be combined with these forces in more positive ways. And, by forcing us to think about a world where we don’t exist but other beings do, it can help us to cultivate humility in relation to other beings and ways of life.

At its very best, thinking about the end of ‘humanity as we know it’ it can cause humans to imagine creative ways of responding in the face of the loss, destruction and radical finitude. The pangs of melancholy or anticipated loss can help us to engage with the world with a greater sense of attachment and respect. Awareness of finitude and the massive scale of time can help us better to value and attend to the conditions that we cherish.

All of these things are likely to lead to a sense of commitment to the world that can inspire creative action.  They offer much stronger for inspiring action  because they are based on positive affective attachments rather than nihilism and fear.

In other words, a little bit of apocalyptic thinking can be a good thing – and it may be necessary if humans are to make even a minimally adequate response to the large-scale harms to which they have contributed so much.

The problem with Geldof’s brand of pop apocalypticism is that it backs humans into a corner. Claiming that the world will end within 17 years makes human action seem impossible or at least ineffective.

It also entrenches the fantasy of human agency as the dominant force in the universe. Indeed, Geldof calls on his audience to respond to their impending demise by being ‘more human’ – that is, by reasserting human agency. It is precisely this kind of anthro-instrumental logic that closes humans to meaningful connections with other beings and underwrites their destructive consumption of the world.

On the other hand, an outlook that entirely denies the possibility of human extinction can focus human thinking too narrowly on short-term , small-scale efforts. This outlook fails to push human thought and ethics to its borders, and therefore is likely to produce conservative and uncreative responses.

So it’s important to hold the idea of human extinction suspended in our minds as a contingency, in two senses: as one possibility among many, and as a point from which many possibilities may emerge.

Ironically, this may be the only way to generate the ethically-infused action needed to protect humans and the many other kinds of beings with whom we form a world. To do this, we need to contemplate the end of ‘humanity as we know it’ without treating it as the end of the world.